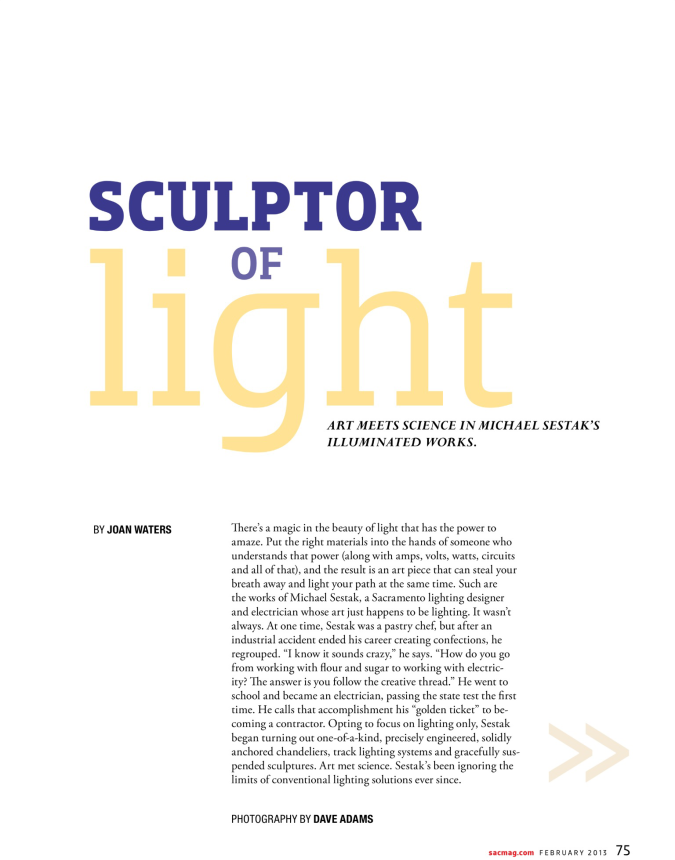 Posted on by Sestak Lighting Design

There’s a magic in the beauty of light that has the power to amaze. Put the right materials into the hands of someone who understands that power (along with amps, volts, watts, circuits and all of that), and the result is an art piece that can steal you r breath away and light your path at the same time. Such are the works of Michael Sestak, a Sacramento ligl1ting designer and elect rician whose art just happens to be lighting. It wasn’t always. At one time, Sestak was a pastry chef, but after an industrial accident ended his career creat ing confections, he regrouped. “I know it sounds crazy,” he says. “How do you go from working with flour and sugar to working vvith electricity? The answer is you follow the creat ive thread .” He went to school a11d became an electrician, passing the state test the first time. He calls that accompl ishment his “golden ticket” to becoming a contractor. Op ting to focus on lighting only, Sestak began turning out one-of-a-kind, precisely engineered, solidly anchored cha ndeliers, track light ing systems and gracefully suspended sculpt ures. Art met science. Sestak’s been ignoring the limits of conventional lighting solutions ever since.

Keeping up with the latest in design, technology and innovation, Sestak Lighting Design offers the widest variety of design options for condominiums and lofts, restaurants and night clubs, shopping centers and other commercial developments. Learn More »